Stopping into your local dispensary for a pre-rolled joint is one of the greatest conveniences that cannabis legalization has offered. More than pipes, bongs, edibles, oils, dab rigs, or any other means of consumption, the joint remains an icon. It may be the only method that, when pantomimed, says to the rest of the world, “cannabis!”

A joint is cheap, discreet, disposable, and easily shared among friends. It requires neither the financial investment of a bong nor the time commitment of an edible. But unless you’ve got nimble fingers or hours to spend practicing, it can be tough to learn how to twist one up. 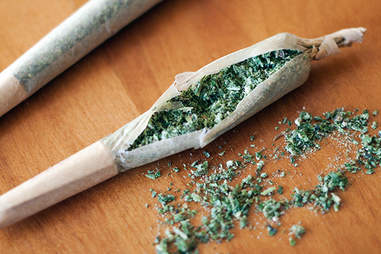 THE HISTORY OF PRE ROLLS

Before legal, regulated markets, consumers themselves were the ones rolling joints. But as medical dispensaries and recreational shops emerged, demand grew for ready-made smokeables. By now, pre-rolls are almost everywhere, serving as go-to gifts and common suggestions to cannabis newcomers.

We would all like to believe that each dispensary rolls their joints with top shelf bud, using the same love and care that your friend Molly did back in college so that you could all have a good time together. But this is the real world and dispensaries are less like your friend Molly and more like your weed dealer, Andy, who was hella cool but also in it to make money. To that end, most pre-rolls are basically produced as a way to squeeze a little bit more profit out of each marijuana harvest.

“Out of maybe the 50 pre-rolls that I’ve got from dispensaries, two of them have been smokeable,” lamented one cannabis-focused YouTuber. “The rest have just been disgusting. They’re in the trash, they’ve got broke up, they’ve just not been smoked. It’s pretty gross.”

He’s not alone. Many in the cannabis community steer clear of pre-rolled joints because of the perception that they contain low-quality cannabis. But where did that reputation come from? Is it deserving? And does it really mean pre-rolls aren’t worth it? We spoke to budtenders, producers, dispensary owners, and cannabis enthusiasts to find out. It’s also worth mentioning that there are some truly fire pre-rolls joints out there, however, they won’t be the ones that you find for bargain marijuana prices. The biggest problem with a pre-roll is the paper, because it hides what’s inside. That makes it easier for producers to get away with using subpar cannabis or trim. Even when a store includes high-quality cannabis, consumers still can’t judge what’s inside — so the store may see little advantage in stocking high-quality pre-rolls.

THE PROS OF PRE-ROLLED JOINTS

Cost is low. You can usually get them with other purchases as long as it’s over a certain dollar amount. Penny preroll with my $50 purchase? Yes please, because you’re practically giving it to me and I will take it.” – Austen

“You can find great deals on pre-rolled joints and they come in two different sizes that I’ve been able to find. Sometimes they will be packaged together with different deals.” – Patrick

“Sometimes you get more cannabis for the price.” – Justin

“Pre-rolled joints allow you to try a little bit of everything. With the wide variety of strains out there, it’s hard to try everything. It also isn’t cost effective to purchase large amounts or even individual grams of something you may not like. I like to get a preroll of new strains that I’m just wanting to try out.” – Winston

Pre-rolled joints are quick and easy

he best thing about pre-rolled joints is that you can just pop in and out of a pot shop and be puffing in minutes.” – Gage

“All the work is done for you. All you have to do is light up.” – Justin

“Pre-rolled joints allow people who don’t know how to roll their own joint (HINT: have you seen our Sushi & Joint Rolling Class? *wink wink*) to enjoy joints, I guess.” – Nick

HOW TO SPOT GOOD PRE ROLLS

I turned to fellow Leafly employees to steer me toward good pre-rolls and bad ones in the Seattle area. The good producers came quickly: Solstice and Vashon Velvet. The bad ones were harder to nail down. Someone remembered a bad joint but couldn’t say where it was sold or who made it. Out of curiosity I once cut open a pre-roll I got as a gift, and while it looked a little dusty, it was free of stems or other unwanted plant matter. Most people admitted they don’t usually smoke pre-rolls anyway, in part because of their bad reputation. It’s easy to find anecdotal evidence of bad pre-rolls, but frankly it was hard to find one on the spot.

Without access to dispensary shake, Vashon Velvet makes pre-rolls from the same nugs it packages and sells… for the most part. The Vashon Island-based farm packages the prettiest ones — the tops of the plants — and then harvests lower buds to grind and roll into joints. “They’re still good-quality cannabis, but they’re not quite what we’d want to put in a bag to represent our stuff,” said Vashon Velvet’s Patrick Rooney.

The nugs are ground to a fine consistency and then screened to remove twigs and stems, he explained. “We select pretty carefully. I only put stuff into the joints that I would roll myself, you know?” The joints are individually inspected and packaged in boxes, then heat-sealed to help keep the cannabis fresh — an important step, said Rooney.

Cannabis beginners go for prerolls because they’re a bargain, they’re convenient in that fast-food kind of way, and there some fun top-shelf options out there that contain concentrates or specialty strains. On the other hand, more experienced consumers usually opt out of pre-rolled joints because they contain low-grade flower, the machines still haven’t learned to roll properly, and with prerolls you’re missing out on the age-old process of crafting your own joint.

If it’s your first time at a dispensary, go for it. Try a pre-rolled joint and decide for yourself!

Pro tip: Get your rolling papers at theblacklightzone.com for 10% off. Just use discount code MY420TOURS

BECOME A JOINT MASTER ON A CANNABIS TOUR

Every Thu, Fri, and Sat

$79 Per Guest
Sushi. Joints. Denver-style. Refine your joint rolling technique and learn to roll sushi. Then feast on your creations.
View Details

Every Tue, Wed, Thurs, and Fri

Every Thu, Fri and Sat

$89 Per Guest
A Cannabis-themed Beer Tour. Get lit like the locals on a party bus to a grow house, dispensaries, & a craft brewery.
View Details

Everyday beginning at 11AM
$550 for parties of 3 people
Roll J’s and Sushi. These is not a more creative and fun way to enjoy Denver than this right here!
View Details

$79 Per Person
Explore THC in its purest form. Step into the concentrates classroom and get inside the dabbing and vaping trend.
View Details

$59 Per Guest
A Window Into Weed. Get a panoramic view of craft cannabis production, led by experts at Seed & Smith.
View Details

What Is Live Resin?

The “Champagne” of Concentrates
Read More

Fresh from the My 420 Tours Team

How to Tell if Vaping is Safe?

Setting Up Your Cannabis Infused Kitchen

Travel Guide To Cannabis Experiences Around The World

What is a budtender?